And you thought Bees were busy? 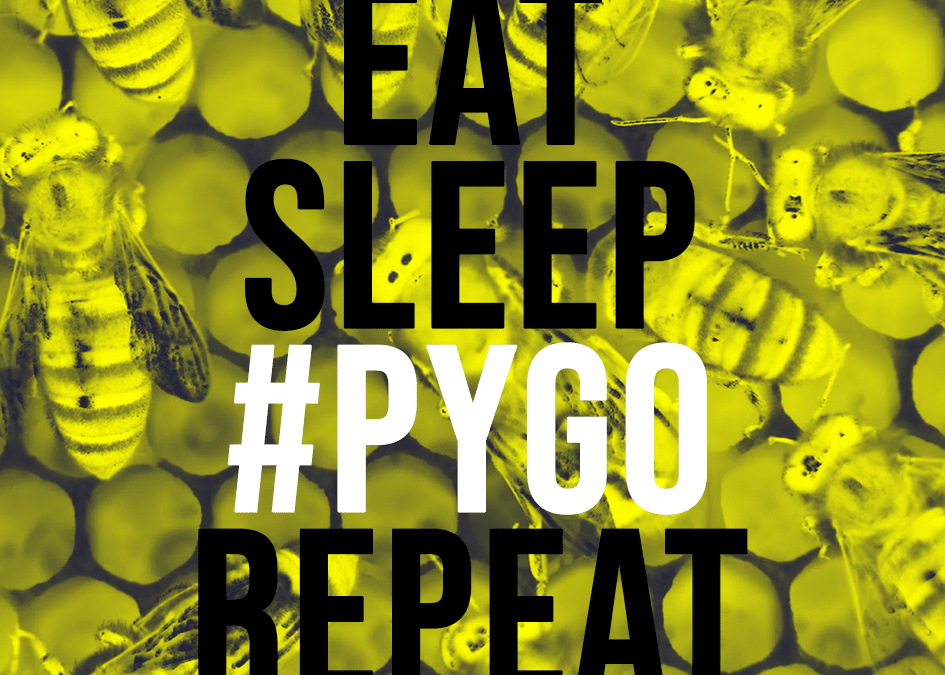 PYGO Update (Kickstarters) June 2019 Hi All, After much silence (ggrrrrr, yes we are truly sorry) we’re finally back with an update. We hate not being able to do as much communications as we’d like but believe you me, we are very busy getting this product to market as quickly as we can. This is Pycom’s most complex and challenging project yet….but those of you who know us, know that we’ve never been ones to shy away from doing the difficult bits 🙂 It’s important to understand that our Pylife & PyGo development is staged across Hardware, Software and Services. Each of these are gathering pace at different levels but with the ultimate aim of coming together nicely… well, that’s the plan at least 🙂 So, what’s new on the PyGo and Pylife front? Well, as some of you predicted, we are delayed. Still, there’s a load to update you on and we’ve tried to organise it logically in what follows. PYGO HARDWARE We’ve been iterating like Mad! Our previous FiPy module took 4 iterations and this one may well hit that same number. That’s what happens when you innovate… boards are getting tinier, antenna requirements are getting more complex and power consumption must meet the user functionality we have set out. You would have seen a number of times now on youtube that we have some sample boards. We’ve been through 3 iterations already and making good progress. Every time we iterate it’s a 3-4 week wait to get the new boards and then we need to test extensively. PYGO1

The PyGo Reference Board which is used for development and testing – the . real PyGo is just too small 🙂

This development is going well and this part of the project now looks to have the following timelines: 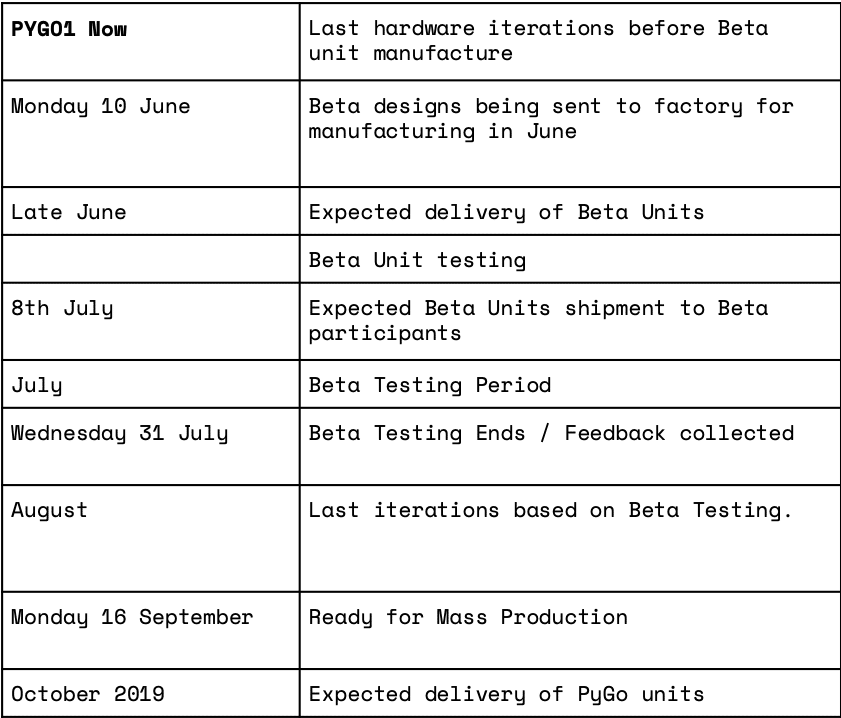 PYGO2 There’s a price to pay for unchartered territories and being at the forefront of innovation: uncertainty. This is the case for PyGo2 too. We thought we could do it quicker than we are able to. We’re backing the development of PyGo2 off the PyGo1 with the addition of the cellular circuit. Part of the challenge with PyGo2 is that we’re literally cramming loads of components into a tiny enclosure… including lots of core cellular technology We need to somehow balance that with usability, features and networks. In the process of thinking all of that through we’ve decided to introduce a small hardware change which we think you might like. We are now going to accommodate a Nano SIM instead of the chip SIM originally planned. More about that in the Cellular Networks update below. …and before you ask, no, we don’t believe this will affect the IP67 Rating… Think Mobile phones and external SIM cards. We are also looking to improve on the IMU and upgrade to a super cool Bosch component giving you loads of cool applications possible for indoor navigation. 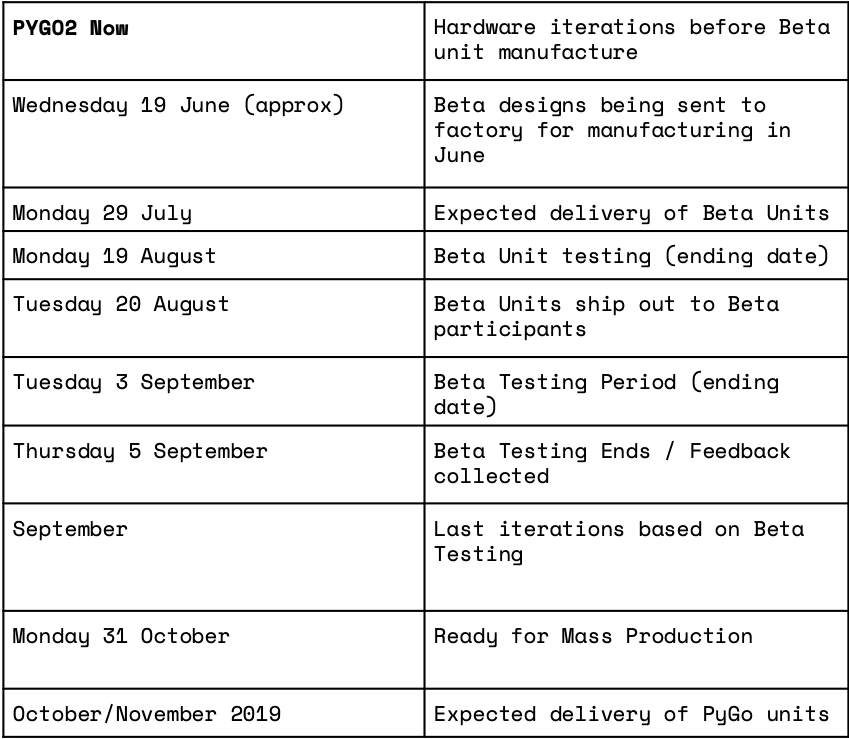 PYMESH So, Pymesh is coming along very nicely. This is a technology which will allow all PyGo users to connect to other users (in a closed MESH) or other users and even hop to connect to the internet. By the way, some companies charge for this service BUT we pride ourselves on innovating and offering these services FREE… I guess that’s the spirit of an Open Source company! It was released in draft last summer and has come on in leaps and bounds since then. There’s still some work and maturing to be done but so far so good. Below is an outline of what’s available today and what’s being worked on over the coming couple of months. We don’t know if you’re following us on twitter yet, but if you are, you may have spotted that at our GOINVENT World Series events in Dublin, Eindhoven, Berlin and Madrid we got the participants to join the Pymesh with their FiPys. The Pymesh is real and users love it!  We even have a TTN group in the UK wanting to make it a record size global mesh network…let’s see where they get to 🙂 Here’s a quick simple overview of the architecture and how this all connects

Below is a status of where we are with the features we need to implement for the Pylife project. 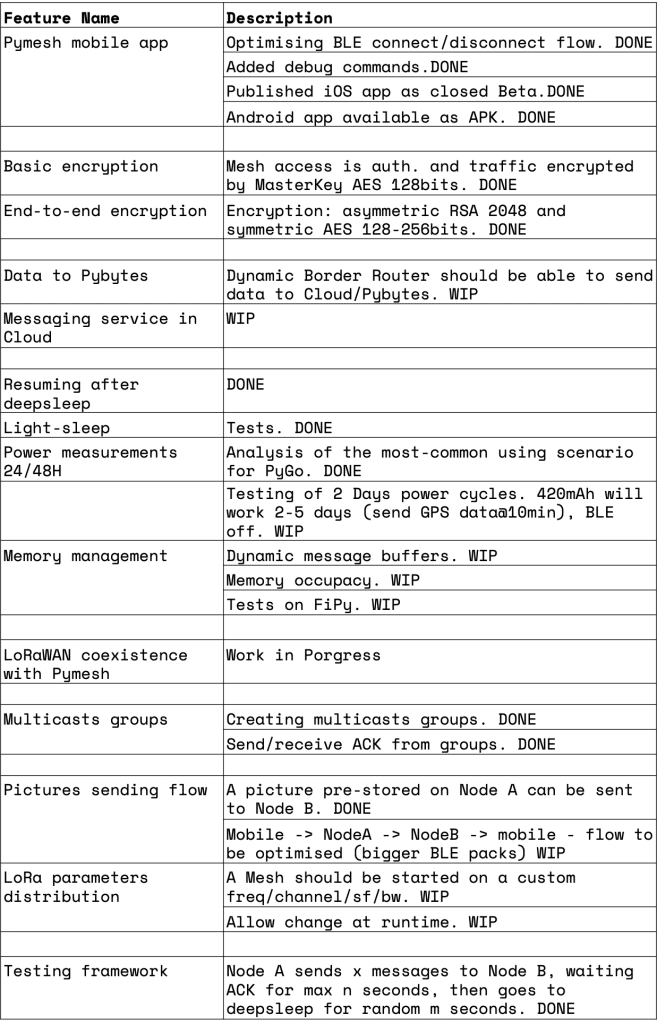 As you can may know security is a very large part of the development. It’s split into levels as below: Security Level 1

– authenticating in the Mesh (different Key, would provoke PyGo to start his own Pymesh) – encrypting all traffic within Mesh – accept the Announcements Security Level 2A Intra Mesh End-to-End

Level 2B Inter Mesh End-to-End where the DTLS channels (A-C) have to be bridged by Border Routers (and Cloud).

THE PYLIFE APP Over the last couple of months, we have been busy developing the App… Its a generic App with functionality cutting across PyGo and our other Pycom modules. The more the merrier we say! In the first instance, we’ve specified an auto-configuration part of the app which we will also release to users of development boards and OEM modules. It allows configuration of 1 or 10k devices in one go. There are a load of more features being implemented at the moment by our Apps team. It’s looking good but we need a bit more time to finalise before we can show off. In April, we posted this simple overview of how to transfer images via the Pymesh on Youtube (just in case you missed it) 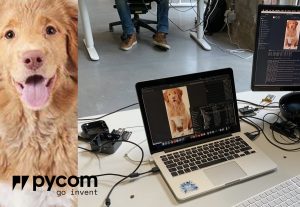 We expect to have a draft release for the beta participants but it will not appear on the Apple App Store nor Google Android store until final release. CELLULAR NETWORKS We had originally hoped that the Cat-NB1 and M1 networks would be more rolled out and that we could have chosen a chip sim for each region. This is not however going to be the case over the course of the Summer and therefore we have chosen to make a small modification to add the SIM as a Nano-SIM instead of a chip. This is great news as it offers far more flexibility in the choice of network provider and as you may know, we’re already working with a few so will be able to offer a small set of choices as to which network you hook up to. That’s it for now friends. Delays, yes sadly, but lots to tell you and we continue diligently toward delivery of this mahooosive project. Thank you for your continued support. We’ll be back in touch with news around the Beta program soon. Best wishes The Pycom Team