In the jungle of IoT devices, a new device, initially a Kickstarter project, caught my attention: the WiPy. Particularly because it can run programs written with MicroPython. There are many ways to play with your WiPy. Of coarse you can explore controlling GPIO pins or the I2C capabilities and other nice stuff. Currently my focus is on communicating with the outside world.

There are many ways to integrate your WiPy in a network. And although every project is different, a solution that probably fits many projects is to have your WiPy act as a dumb client of a (web) server. Most of the logic should be put on the server. 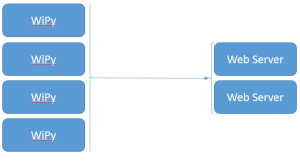 Even though this post is about the WiPy, the following considerations apply to many IoT devices.

Another reason is security. From a security point of view, it is better to have only outgoing traffic from the (local) network your WiPy connects to.  You can run a web server on the WiPy. However, I don’t think the WiPy is designed to run a web server:  you would not be taking advantage of the low energy consumption in stand-by modus or even better, in deep sleep, it would be easy to flood your WiPy with requests. And is that web server able to include proper security measures (taken in consideration the small – at least for a web server – application footprint), like full blown, proven web servers do? Most likely not.

Now, lets make some decisions on the server part. If you want to expose an endpoint over the internet, you have to make sure only authorized clients can consume that endpoint, e.g. by an API key. Then you would need some kind of management to revoke an API key when it is compromised. When numbers are counting, geographic location, availability, scaling and cost might be relevant issues. I choose to go with an cloud platform I already know that comes with features to address (some of) the aforementioned issues: Microsoft Azure, specifically Event Hub of Azure Service Bus. Also check out Azure IoT suite (I have to…)!

A few of the reasons to choose Azure Service Bus include: 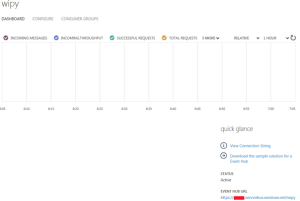 And then select Configure. 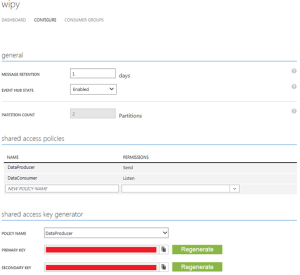 Configuring is easy. I set up a DataConsumer and DataProvider with according permissions.

The WiPy will be a DataProducer. To keep the primary and secondary key secret, the WiPy can’t use these to authenticate. So to let each WiPy authenticate with a unique credential, we have to generate  a Shared Access Signature (SAS). The easiest way to do this, is using the Event Hubs Signature Generator (thanks to Sandrino Di Mattia) . You can read about it on IoT with Azure Service Bus Event Hubs: authenticating and sending from any type of device.

Having a SAS generated, we can head over to start programming the WiPy.

Before trying to connect to Microsoft Azure, ensure:

From this point on, it is straightforward: just make your HTTP request. For simplicity, I will focus on constructing and sending an HTTP POST request, with an arbitrary payload.