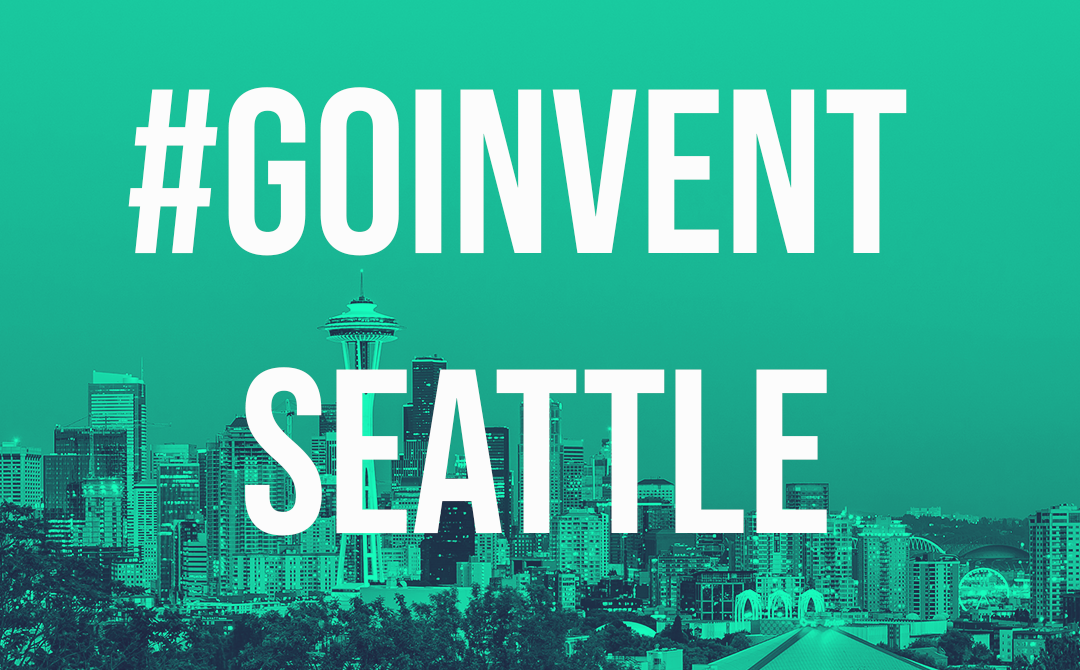 It was another whirlwind of an event for our Seattle #GOINVENT World Series Workshop.

Fully prepared for wind, rain and hail, we were delighted to lay aside our waterproofs and umbrellas as the sun shone down on us. (Though we were left kicking ourselves for having buried our sunglasses somewhere in our bags.)

We started off with the wrong address…but soon realised that the actual venue was just across the road, so nothing lost other than a bit of time! (And we were on the receiving end of a few quizzical expressions from some some participants who didn’t receive the last minute email from us.)

If we know one thing that Seattle is famous for, it’s its coffee and we were not let down in the slightest. May a thousand blessings rain down on the wonderful people at the World Trade Centre, Seattle.

So, we were caffeinated, fed lovely cream-cheese bagels and more, and ready to launch into our second #GOINVENT World Series Workshop in the USA. 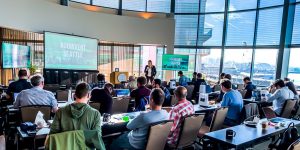 The programme for Seattle was much the same as that in New York. Fred took to the stage, introducing to the audience who Pycom is and what we do. He happily chatted about how tricky it is to navigate the jump from start-up to scale-up and gave everyone a few hints and tricks in making that step a bit easier. Passing the microphone on to our much-loved top technologist Christian signalled the beginning of the FiPy fun!

As always, there was an explosion of joy.  Bags were thrown to the floor and makers’ eyes sparkled with glee at the unveiling of the FiPy expansion kits. Everyone made sure that they had fitted the FiPy and expansion board together properly (meaning ‘the right way up’) and that the antennas were exactly where you should find them. 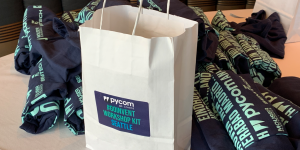 The audience then got started with the Pymakr plug-in on ATOM or VSCode. We aspire to make this part of the journey super simple and (most of the time) it is.

Even though neither Espressif, Semtech, nor Sequans were with us in person in Seattle, they were with us in spirit as we walked participants through the various microcontrollers and radios on the FiPy development board. 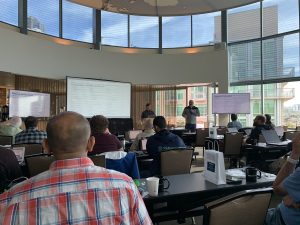 Another partner had joined us – Verizon had arrived in the shape of partner–guru David and network and certification expert Scott. They talked us through the current and future plans for the Verizon Cat-M1 and NB1 networks and gave participants ‘secret’ insights as to what’s coming. This was very exciting and we all felt a bit like James Bond’s Q.

So, much like New York, the hunger had begun to set in – just so much brainpower was being used! We’re pretty sure we heard a few murmurs of quiet joy (and maybe even one or two exceedingly loud ones).

Following on from lunch, everyone received their Verizon SIM cards and we started the journey to get everyone up and running on their CAT-M1 network, and began to connect via Thingspace.

This was not a trouble-free session. Partly due to some minor issues on the Thingspace platform and partly due to come localisation requirements for our FiPy firmware. Christian quickly wrote a new firmware piece and with Scott and David’s help everyone soon got their FiPys connected.

We finished the day with an excellent Pymesh overview and demonstration by Catalin. 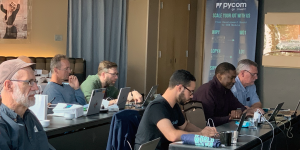 Gosh, what a day of intense efforts on everyone’s part!

We received some early feedback from one of our kind participants, who simply said:

“Thanks for a very educational Workshop”

(That sums it up really quite neatly!)

Well, we’ve said it before, and we’ll most definitely be saying it again. We absolutely love every #GOINVENT workshop. It never ceases to amaze us just how creative our community is. We’re always surprised by what you come up with. So, all that’s left to say is, keep it up guys!

So, it’s over and out from us, Seattle!

A special thank you remains to all our partners who  have supported us and not least with sponsorship for this series of #GOINVENT workshop series: