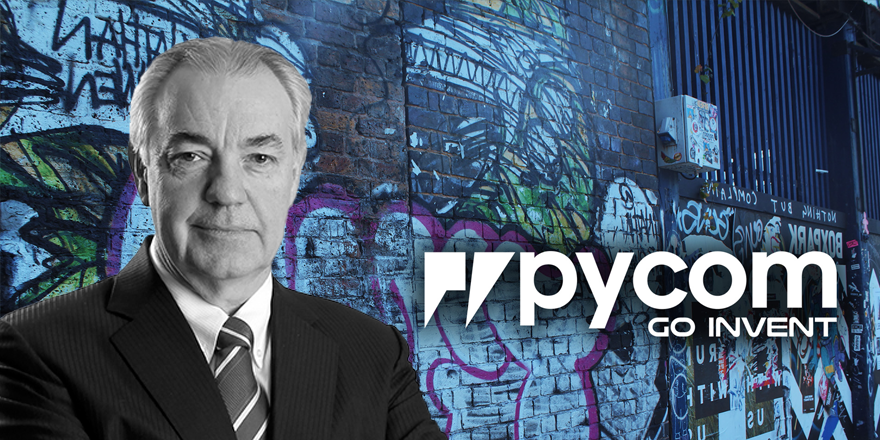 London, 05 July 2017. For Immediate Release: IoT tech startup Pycom has today announced the appointment of ex NetComm Wireless CEO David Stewart as Chairman with effect from 1st July 2017. David succeeds KO Chia who, after a year on Pycom’s Board and almost a year as Chairman, announced in May his decision to step down from the Chairmanship while remaining on the board of directors to continue his support for the growth of the company.

The news of the appointment comes after a year and a half stint of building the startup from scratch and with recent achievements including the development and market introduction of an IoT hardware portfolio as well as associated full-stack cloud based software applications as well as a growing 60k+ developer community earning the company a nomination as “Cool Vendor” by Gartner as well as a shortlisting as one of TechCrunch-sponsored TheEuropas hottest “IoT Tech Startups in Europe”.

An entrepreneur and CEO for more than 30 years, David Stewart founded Banksia Technology Pty Limited in 1988 and successfully managed the company as a fast growing and highly profitable business. In 1996, he instigated the successful takeovers of a number of his competitors. David then assumed the role of Managing Director of the merged entity.

“David is the best Chairman Pycom could wish for. He has a strong record in both managing and chairing Telecoms hardware and IoT related businesses, a deep understanding of life in high growth startup operations and a strong alignment with our ethos, culture and commitment to serving our growing community of developers. We are delighted that he has accepted the role.” said Pycom’s CEO Fred de Haro.

He retired at the end of 2016 and is now a Strategic Adviser.

David Stewart said that “Pycom represents my passion. The team is working right in the melting pot of startup business and serve the hottest tech market today with innovative technology. It’s a path I understand very well and so when I met the founding team I decided to take the challenge to help them grow to their full potential. It’s been a great journey so far”