The State of LTE-M 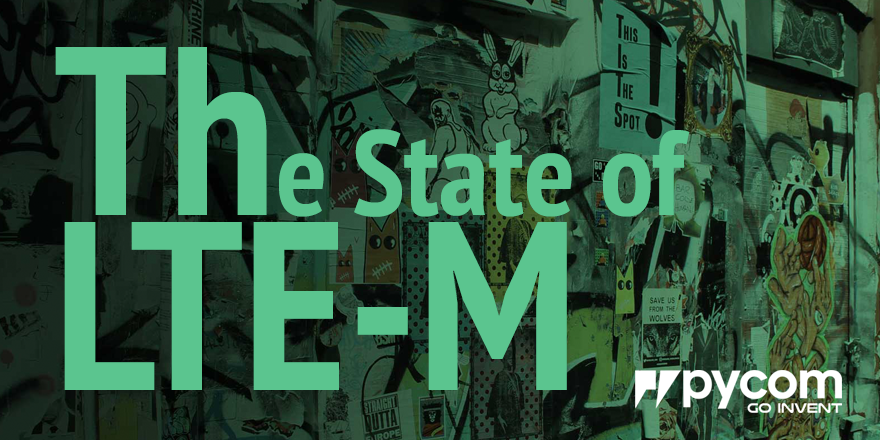 What we know and Pycom plans

The following is a mashup of information collected online over the last few months, from reliable sources as well as directly from the conversations we’ve had with the various mobile network operators. Many of those conversations are still under wraps (yeah, NDAs and all that) but we have been able to give you a summary of what we think’s happening with LTE-M.

There is SO much going on with LTE-M and it’s everywhere in the world!

THE BASICS: What is LTE-M?

BI Intelligence on communications technologies used shows cellular as the second most used technology for IoT. The progression from 2G/3G/4G for IoT is the migration to LTE-M (NB-IoT or CAT-M1). It is said that NB-IoT will deliver the LPWA component of 5G. 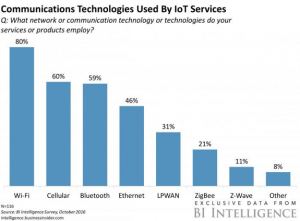 LTE-M is based on 3GPP standard release 13 released ratified in June 2016. It presents a new Category M1 device optimised for the IoT able to address the LPWA connectivity for cellular communications.

Manufacturers of LTE-M products will benefit from CAT-M1 chipsets and module such as the Monarch from Sequans which are optimised for IoT yet giving a reduction of complexity and cost over existing LTE Cat 4/1 modules, also known as 4G.

Similar to other LPWAN networking technologies, products using LTE-M will have longer battery life of up to 10 years when using additional features such as Power Saving Mode and eDRX.

LTE-M can increase signal coverage area by up to seven times, or 20 decibels (dB), compared to existing GSM technology.

WHAT’S THE DIFFERENCE BETWEEN NB-IOT AND CAT-M1?

There are two different standards under 3GPP Release 13 – NB-IoT and CAT-M1. The key differences are that Cat M-1 has a higher peak data rate as well as time-to-market, while NB-IoT has greater flexibility in spectrum available and modes of operation.

Last year, our partners Sequans wrote a really neat article on LTE-M from an application point of view with a great visualisation of the various cellular networking technologies. 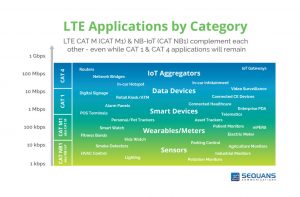 Excerpt from the article here:

Data rate
Cat M1 defines a 1.4 MHz channel size and throughput of about 375 kbps uplink and 300 kbps downlink; Cat NB1 defines a very small channel size of 200 kHz and 10s of kbps of throughput. While certain applications, such as an IoT temperature sensor, will require only the smallest amount of throughput as available with Cat NB1, other applications, such a health or fitness wearable, transmitting a little more data, will need the higher throughput of Cat M1.

Mobility
Connected mobility is determined by the ability of a technology to do handover between cells. Cat M1 supports handover (except in the coverage enhancement mode), but Cat NB1 does not. If your application is mobile, such as a health or fitness band or other wearable, Cat M1 is needed; if stationary, as in the case of an industrial sensor, then Cat NB1 will do.

Power Consumption
For data transmissions above a certain level (hundreds of bytes) Cat NB1 will consume more power than Cat M1. The higher Cat M1 throughput allows devices to get to sleep faster between transmissions, thus saving power. This means that Cat NB1 is the best technology for simple sensor and metering applications, transmitting in short bursts, but that Cat M1 is the best fit for applications needing to transmit more than a few hundred bytes of data.

Latency
Can your application tolerate latency? With Cat M1 latency is similar to the latency in a typical Cat 1 deployment, approximately 10-15 milliseconds, but with Cat NB1, latency is greater and can range from 1.4 seconds to as much as 10 seconds in some deployment scenarios. For sensor and metering applications this is not an issue and Cat NB1 is suitable, but for latency intolerant applications such as warning or alarm systems, Cat M1 is needed.

Take a look at the full article here: http://www.sequans.com/narrowband-lte-which-apps-need-cat-m1-and-which-need-cat-nb1/

In 80% of cases it’s a question of updating the 4G base stations most of which are supplied by Huawei or Ericsson.

This does mean that, without a base station / hardware update by the network operators, the LTE-M service will be limited to where there is current 4G services available. Here’s the current penetration of 4G.

WHAT LTE-M NETWORKS ARE IN PLACE TODAY?

Ultimately we believe that all network operators will offer both NB-IoT and CAT-M1, but it may be a few years before pan-region networks exist.

There’s been a tendency to roll out NB-IoT in Europe whereas the North America based operators have opted for CAT-M1. As is often the case, the LTE-M networks (apart from the head-to-head competition of who rolls out first and fastest between Verizon and AT&T in North America), we have seen a slight delay in the roll out plans of the various networks. However, once the green light is given for a roll out, it is a matter for switching the LTE / 4G networks via a software upgrade and so the roll out can happen relatively quickly.

There seems to be plans amongst a lot of operators in Europe for networks to be switched on and rolled out by end of 2017 with a view to full commercial deployment starting 2018. Yet, many trials and controlled device roll outs are taking place all over Europe.

Pycom is in talks with 8 operators around the world but due to confidentiality agreements we are not at liberty to give exact details of the plans for each network operator. However, below is an overview of the information in the public domain related to the various operators we know are rolling out. It’s their official plans and also what Pycom is planning.

‘No discussions yet’ doesn’t mean we will not engage with a certain operator. In true Pycom form, we have no exclusivity agreements and so it is more likely a statement of ‘we haven’t been able to engage yet but we most likely will in the future’.

Please note: The roll out plans are continuously updated by the Mobile network operators and it is worth following their news in your region as the below may very quickly become out of date.

The Cellular Chip used in FiPy, GPy and G01.

By now, the Monarch chip, while still brand new, has been integrated and tested with many of the world’s mobile operators already which should significantly lighten and shorten the testing and certifications load for Pycom’s portfolio.

Working with 8 operators to enable and certify the FiPy, GPy and G01 on their networks…and more to come.

Network certification can be costly (sometimes as much as €50k) and so we have to pace ourselves a bit. In addition, it is worth observing the roll out schedules for each of the network operators to try and tie in with network availability….we’re sure you’d agree that there’s no point certifying on a network that is far from rolled out. Below is a breakdown of our certification phases.

Please note that the date and roll outs are fluid still and therefore things may change. In addition, other network operators will be added to the list as we engage and understand more about their roll-out plans.

Pycom is in talks with some of the above network operators about providing Nano SIM cards to customers. This is purely to make sure that the SIM/connectivity purchase and network on-boarding is facilitated making the process easy for our developers. As always with us, there’s no obligation to run with our provision and each developer can go and choose other SIM/connectivity solutions if they wish. This gives everyone complete freedom to work with a network of choice.

We’re working as quickly as we can to get the SIM/Connectivity Reseller framework up and running on our Webshop and hope to be able to offer the first ones in October/November 2017. It is not anticipated however that Pycom will be able to provide Network / Connectivity support. We’re just not staffed for it at present but we will provide contact details for each of the operators we work with to ensure support is available.

As we mature the Pybytes Middleware, we will include mobile network and connectivity data there too, so that users can have one free and common platform for device management.